10 Book Covers By Black Authors We Loved This Month

Sistah Girls, I know the old saying, “Don’t judge a book by its cover,” is true because you never know what’s inside.

However, you can’t deny that if you’re walking down an aisle of a bookstore or perusing Amazon for your next one-click read you don’t suddenly stop when you spot a great book cover.

Each month we’ll drop a list of books that have some dope covers and tell you why they made our monthly round-up. They will come from all genres and they don’t have to have been released in the month we highlight them–they just have to be dope.

The Reinvention of the Rose by Christina C. Jones

This cover is absolutely gorgeous, there is really nothing else to say after that. The model is beautiful and the layers, my god the layers. The thing about layering (because I know a little something, something) is that it can be a gift and a curse.

You layer too much and you overpower the main attraction (in this case the model) you layer too little and everyone is trying to figure out what is messing up or typically casting a shadow over the image we should be focused on.

In this case, the layering is just right! I can clearly see the roses, the white background with specs of green–perfection.

Not a phenomenon Tempest could typically claim, but certainly the catalyst for where she’s landed. Not in peril, or pain, but in dire need of the very normalcy she’s often emulated but never been able to obtain.

Now… there’s nothing in her way, except all those years of being everything except what she now has to become. Herself. As soon as she figures out who that is.

The Girl with the Hazel Eyes by Callie Browning

This is another cover where the layering was done right, I personally love writing over and image, it gives it a mystery and pulls you in. The Black women on the cover with the hazel eyes and the flowers bring the entire cover together.

Book Synopsis: As Lia starts to unravel the reclusive author’s life, she realizes that some things just don’t add up. Susan has been hiding a massive secret for decades and Lia is determined to find out what it is. The Girl with the Hazel Eyes is an endearing novel that tugs at your heart with its examination of love, lies, and loyalty. Read the full synopsis HERE

Yearn for Me by Ivy Laika

Talk about a cover that makes you do a double-take! I love how masculine the cover is while also adding some feminine touches (the font) that make the cover stand out. The light hitting the top of the model and the darkness at the bottom makes the cover more than just a body shot, it has character.

Book Synopsis: Disclaimer: This is book two of the For Me series. Feign for Me must be read first.

The cat is out of the bag, well more like the baby is out of the bag. The weekend is over and Mac and Christela have returned to their old lives. What has been revealed about Mac has the two in a limbo with neither one sure of how to move forward from it. Read the full synopsis HERE.

All Boys Aren’t Blue: A Memoir-Manifesto by George M. Johnson

I love everything about this cover, from the colors to the texture that the drawing gives off. It’s a serious portrait style cover but it’s also warm and inviting as well.

Clap When You Land by Elizabeth Acevedo

This is another cover where the colors flow and work well with the background. The cover is telling the story before the reader even reads the synopsis. I love the planes splitting the girls in the middle and the background showing that they are in two different places, the cover is really selling the book.

Book Synopsis: Camino Rios lives for the summers when her father visits her in the Dominican Republic. But this time, on the day when his plane is supposed to land, Camino arrives at the airport to see crowds of crying people…

In New York City, Yahaira Rios is called to the principal’s office, where her mother is waiting to tell her that her father, her hero, has died in a plane crash. Read fulls synopsis HERE.

This cover is sexy without doing too much. The model is covered and the lighting makes her look more like a shadow giving the cover a mysterious vibe while still showcasing a lot of femininity.

Navaya enlists the help of her best friend, Xander, to revive the inspiration that used to have her sitting comfortably at the top of her game. Read the full synopsis HERE.

Strumming My Pain by B. Love

When the title of the book and cover match it’s always a good thing. I like it when a cover gives you a bit of information about the book before you skim or read the synopsis. The cover is sexy and leaves a lot to the imagination.

Book Synopsis: Nurse, Elise Waters, has been shaken. After witnessing the murder of the man she loved, anxiety had become her relaxed state and trust is a fair-weather friend.

Forced into witness protection while awaiting her moment of testimony at the murderers’ trial, she meets someone who provokes her truth. Her spirit, searching for soothing, cries out. But claiming healing isn’t so easy.

Izeah Moses is a guitarist with a head for business. As owner of an apartment complex, the presence of his new tenant sends his fingers into a melodic frenzy. Read the full synopsis HERE.

The Rake by Shataya Simms

As soon as I saw this cover I got Scarface vibes and that’s a good thing. The font and black and white color scheme do just enough to make the blood and cards stand out. The chip with the K and the cards give you some information about the book while the blood lets you know that this story won’t be filled with roses and unicorns.

Book Synopsis: Raised in a brothel by her pimp father and outnumbered by her older brothers, Keller Kane always felt that she lived a life that wasn’t her own. Her father, Lucian, groomed her to be a lady, something to be looked at and admired-a trophy of sorts.

His dream for his only daughter was for her to marry rich and be taken care of by her man, but Keller had other plans. Being accepted into Princeton University was her ticket out.  Keller worked hard to become a lawyer and landed her first corporate job right out of law school, but when the politics in her law firm conflicts with her morals, she decides she has had enough. Read the full synopsis HERE.

Property of a Savage: A STANDALONE NOVEL by Jessica Watkins 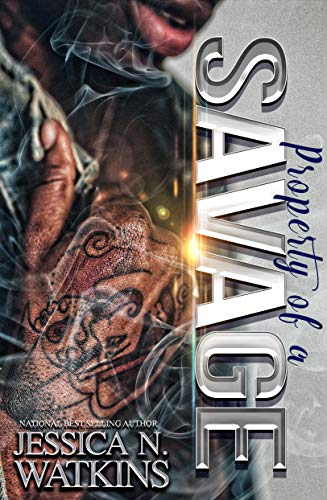 Some people say that all Urban covers look alike, I won’t disagree because we know the formula however I love it when I see an Urban cover that screams Urban but looks damn good. This cover took the cake, from the font to the colors and the hand with tattoo being the focus–love it!

Book Synopsis: At only ten years old, Tempest’s life changed forever. She suffered unbearable loss and tragedy that she would have to live with forever.

For the next seventeen years, she suffered immeasurable pain and ridicule on behalf of the people that were supposed to love and protect her. Then she met Dame. The way that he had come into her life and saved it was more heroic than any superhero in a Marvel movie. Read the full synopsis HERE.

If drop dead gorgeous was a cover–this would be it. The title and the cover go together like beads and braids, I love love the colors and the model.

Book Synopsis: Shiloh Hurston, a 27-year-old bank teller, and poet is left piecing the remnants of her heart back together after ending a volatile and unsatisfying relationship.

During her sabbatical from love, she finds healing in performing poetry at Ray’s, a lounge located in the small town of Roseville. What started as an escape turned into a secret admiration for another performer and crowd favorite, Marquis Kent.

BE SURE TO TAG US ON INSTAGRAM IF YOU WANT US TO SEE YOUR BOOK COVERS!