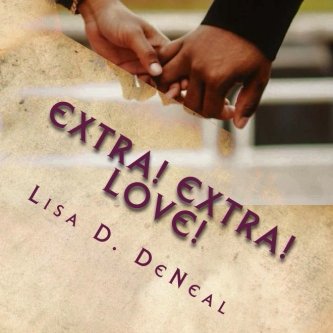 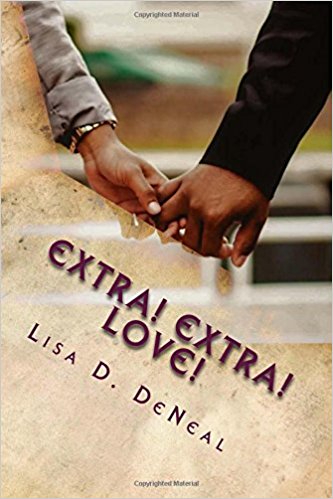 What would you do if you met your childhood celebrity crush? What would you say if that celebrity crush asked you out? When she was a child, Savannah Joi Martin had a mad crush on teen heartthrob, Donnie B., a young actor of TV and movies. She always imagined that he would come to her parents’ home and ask her out on a date.

She knew it would never happen. Never say never. Now a staff writer for The Daily Perspective newspaper, Savannah attends a press conference for a major movie shoot in her hometown, Gary, IN and the main star, is, Donovan Bolton, aka, Donnie B. Donovan Bolton is now 40 years old and still plays the field, but things may change after spots Savannah in the crowd during a press conference.

Sparks fly and chances will be taken. Will Savannah’s crush be all that she dreamed of? Will Donovan change his ways for a chance with a journalist? Or will their romance be a disastrous media circus? Extra! Extra! Love! is the first in the A Front Page Romance Series, starring the Martin triplets, Savannah Joi, Arianna Jayne and Deanna Joyce.

Extra, Extra, Love! was my first book by this author. I’m always happy to introduce readers to a new artist to expand their horizons. The story was nicely developed, and fun read. Have you ever wanted to meet your celebrity crush and envision being his or her love interest? Well… I have, and Paulette Washington better keep an eye on her man. I’ve just warned her for the umpteenth time.

Savannah Joi Martin was a journalist for a local newspaper; she was asked to cover the filming of a movie scheduled for small-town Gary Indiana. Her fellow triplet Arianna Jayne also worked as a photojournalist for the paper.

The third member of the triplets was Deanna Joyce. Savannah’s heartthrob was Donovan Bolton; better known as Donnie B, and he was the love of most ladies in his heyday. Donovan was 40 years old. However, he was still handsome and darn near heart-stopping as in his younger days.

Over the course of the filming, Donovan relished the opportunity to get to know the woman who’d crushed on him in her younger days. Donovan would develop a friendship with her. His co-star and agent you’ll discover later how they will be a fly in the ointment.

As expected, and as always, a woman will be at the center of the relationship storm Donovan and Savannah will navigate. What stood out in the story was the way the triplets each interacted with one another. With all the nonsense associated with the other women, each sister had Savannah’s back.

The ones to watch out for were Nicolette his publicist, and his young co-star Angelique. By the way, he was supposed to be her father, so figure how she expected him to be interested in a mere child. Yes, she was over 20, but still eeewww!

I’ll let you see what happened with that messy little one. On the other hand, Nicolette was subtle, but again, watch that heffa. Deanna was a hoot and a holler. Arianna was a little Pitbull with a camera. She was always ready to do battle for her big sister.

You will see, Savannah was ill-prepared for the media firestorm connected with being Donnie B’s girl. In the end, she was the perfect match for the megastar.

There were some cuddle moments but not a lot of intimate sexual contact, but, I’ve said this before, a story does not always need a lot of sex, sometimes a little dab will do.

The story-nicely told, and the storyline was enjoyable. The build-up to their relationship between the hero and heroine was well done.
Sistah’s this story is worth a read, take my word for it. Four Fantastic Fingers Up!