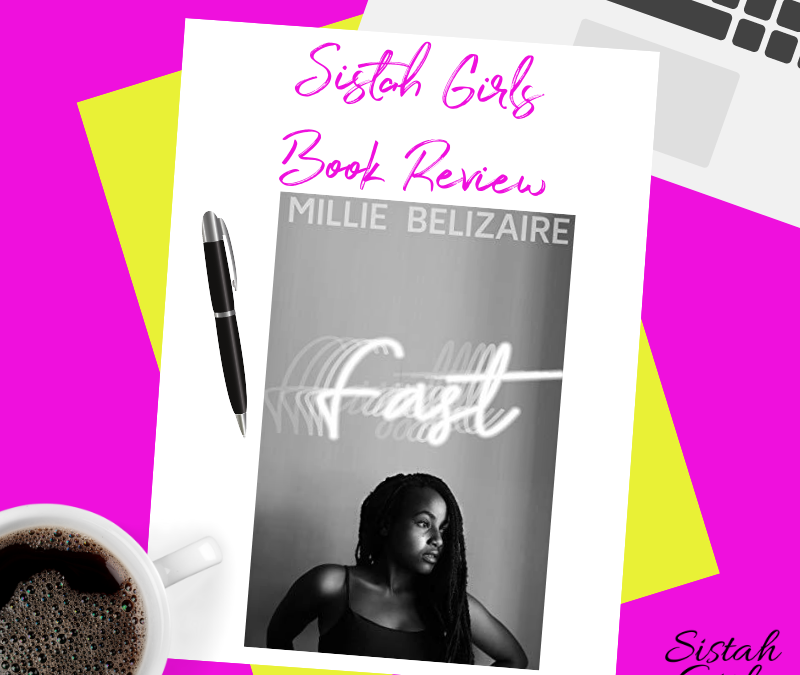 There are these rare moments when I read a book and feel like somehow I missed my calling to be a Literary Agent. You don’t just want to tell others to read the book, you can actually visualize others reading and loving it. At only 3% in I knew Fast by Millie Belizaire was that book for me in 2020. It makes you want to shout from the rooftops. READ THIS BOOK!

Fast is the story of a girl by the name of Caprice Latimore. We meet her at the tender age of eight years old. You immediately get the sense that this young black girl is wise beyond her years. As readers get to know Caprice you see life through her eyes. One life change is soon followed by another life-altering change for the young girl. Believe me, when I say, reading this book will be hard.

While the pain Caprice experiences hit you powerfully in your chest cavity…it is her perseverance that seemingly captures your heart.

After the death of her mother, Caprice finds herself whisked on a plane leaving Mobile Alabama and off to Orlando, Florida to live with her grandmother, Gracie. Gracie has a two-bedroom home in which she has a room with the other room belonging to her son. This leaves Caprice on the couch and she’s cool with that because it allows her to have the TV all to herself.

“Gracie loved me, I could tell, but she didn’t pay attention to me.” – Caprice

For the summer, after seeing some changes involving Caprice’s behavior Gracie decides to have her attend summer camp. At camp, Caprice meets a young teacher by the name of Ms. Kelly. Immediately Ms. Kelly notices that something is not quite right about Caprice, she realizes the young girl has obsessive-compulsive disorder.

Be that as it may, Ms. Kelly takes a genuine liking to her. She in turn feeds the little black girls mind by recommending a book to Caprice. And it’s while reading her books over the summer at the nearby basketball courts that Caprice gets her first crush. Shaun.

“I will always choose you” – Shaun

At first, Shaun is an inspiration for Caprice. He’s the smallest guy on the court so she naturally finds herself silently rooting for him. Then school starts and things change. Shaun becomes so much more than her inspiration, he becomes her best friend and this lasts for years. In high school when you expect the dynamic to have shifted between the two it doesn’t, well at least not at first…

“As the years passed, I watched girlfriends come and go, soon understanding that I was lucky to just be his friend. Because Shaun went through girlfriends like he went through shoes. But friends? He kept those.” – Caprice

It takes a little time but eventually Caprice and Shaun become official as a couple. Then once again, everything changes. The lives of Caprice and Shaun follow the path’s that they both chose yet there is still one MAJOR problem.

The Writing and My Thoughts:

And then there’s Millie, she doesn’t waste descriptions on the mundane things in life. Her writing more so appeals to her characters in a love them or hate them way that sticks to the readers. Oh, and I should mention that while doing so it never feels like she overdid it or was too detailed.

In Fast, it felt as if I was intrinsically pulled in by the main character Caprice, I found myself just about smitten by her wit as a child. I felt hopeful for Caprice as a teen and I was impressed yet a little sad for Caprice as an adult.

And no, the sadness did not last long but it was there lingering in the recesses of my mind. However, it’s not until things begin to come full circle for Caprice that the lingering sadness dissipates from my thoughts.

Additionally, I would of loooooved to get a little more of Caprice and Shaun in their adulthood. These two were obviously made for each other. I can’t really end my review without mentioning Kahfi. His character was one of THE MOST COMPLEX characters I’ve read in some time now.

He draws you in with every scene he has and I hope he eventually gets his own book. Kahfi’s splits intrigued me immensely. You’ll only understand that last statement if you read the book, which you should. Read the Book!

To Buy or Not to Buy? Buy! Go 1-click!
Series: No. This is a standalone read.