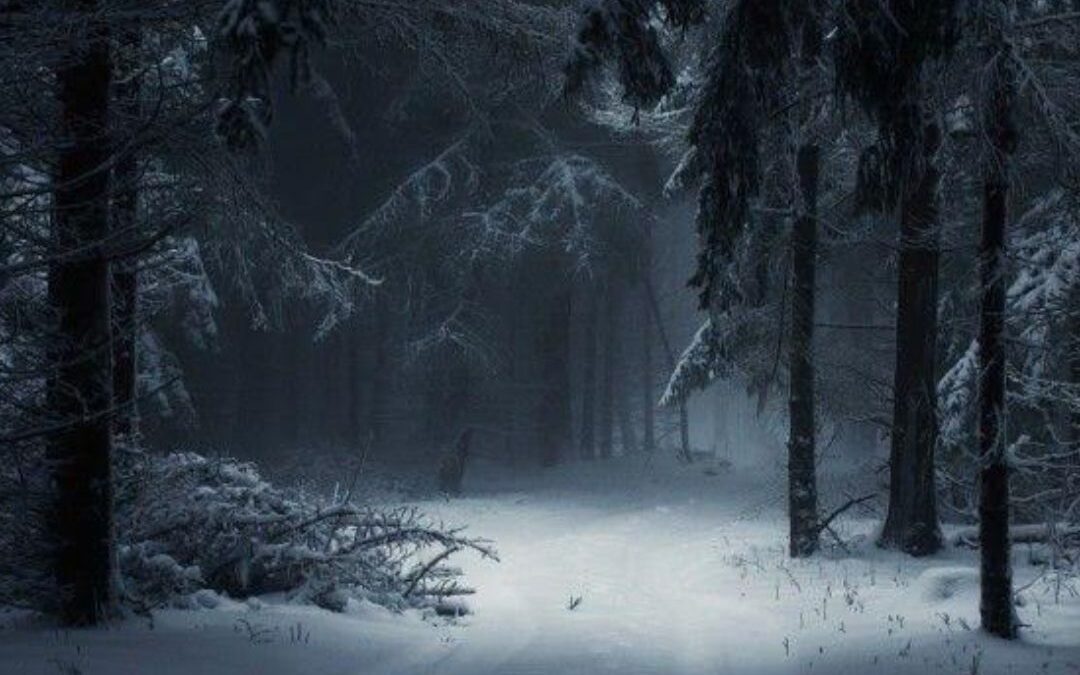 The restrooms were always known as “The Summoning Circle.”

“Every year during winter, the students would go to the biggest stall and try to summon a ghost by the name of Nadia. Nadia died in a car accident five years ago at the age of nine, and the kids created a summoning ritual for her.

They basically just copied Bloody Mary, but that’s a story for another time. I walked into the restroom and locked myself in the biggest stall. The only stall that was surprisingly clean. I took off my glasses and turned on the faucet to the coldest setting.

“Alright,” I cupped my hands and held the cold water. “Let’s see if this stupid trick works.” I splashed the freezing cold water onto my face and let the droplets fall onto my clothes. I wet my finger and wrote the letters N-A-D-I-A onto the mirror. Then I drew a sad excuse of a car on the mirror with the water. I exhaled and closed my eyes. I pressed my cold fingers onto my eyes and repeated the name Nadia in my head three times.

‘I swear if this doesn’t work, I’m killing everyone and then myself.’ I slowly opened my eyes and saw the lights flicker.

“Nadia?” I whispered and slowly put on my glasses. I looked up at the lights and saw them slowly flickering. Maybe it was really working. I was finally going to see her again.

“Nadia?” I asked again, but a bit louder this time.

The lights flickered again then shut off completely, leaving the lights in the hallway as my only source of light. ‘Did it work? Please tell me it worked,’ I thought to myself. I stared at the mirror and saw a figure staring back at me. Then, a cold hand grabbed my shoulder causing me to scream.

I heard laughter coming from outside and from right next to me. “What the-” I quickly took out my phone and flashed the light at the culprit. Eris Hammeron. She was known for playing tricks on people; especially during winter when everyone would be trying to summon Nadia. The lights turned on again and I could clearly see her now. Pale skin, platinum blond hair, and black clothing to contrast her complexion.

“Oh man, you should’ve seen your face!” She hollered and wiped the tear that was streaming down her face. I dug my nails into my palm and bit the inner corner of my cheeks. My foot started tapping on the ground and I grew annoyed at Eris with every passing second. The sound of her laughter echoed in my brain and all I wanted was to hurt her.

My mind flashed intrusive thoughts of Eris all battered and bruised, and man did those thoughts feel amazing. ‘Don’t punch her, Janyne. You know it won’t end well. I mean sure she interrupted something very important to you- Which is exactly why I should break her face.’ “You really think this is funny, don’t you?” I grabbed Eris by the top of her head and made her look me dead in the eye.

“What the hell are you doing-”

“Shut the fuck up Eris. All I wanted to do was talk to my sister, but you fucking ruined that! I haven’t seen her in five fucking years, but of course when I try doing that stupid ritual, you have to go fuck it up!”

I punched Eris in her face. Her nose to be exact- I felt it crack under my fist and man did it feel good. Eris hit her head against the stall doors and fell to the ground while holding her now broken- and bleeding- nose. Serves her right. You ruin my day, I ruin yours. I could feel tears stinging the corner of my eyes, but I wasn’t going to let her see me cry.

I glanced over at the mirror, noticing a small handprint; then glanced at Eris’ hands. Sure, they were small- but not nine-year-old ghost small. I internally smiled and left Eris and her group of friends to clean her up and get her to a nurse.

“Hey guys I’m back. Sorry I took so long,” I apologized and sat at the lunch table while rubbing my knuckles. I heard my voice crack, but I hoped they didn’t notice it.

But I did notice a new mug of hot coco next to my plate of food. I glanced at my friends in confusion. “Did Eris put this here?” I asked, annoyed. I wasn’t about to drink this and risk swallowing a spider.

“Oh gosh no,” Libby laughed and took a sip of her hot chocolate.

“The lunch ladies were passing them around, so we got one for you.” I smiled and took a sip of the hot coco.

The warm chocolatey liquid instantly warmed me up from the inside out. “Thank you, guys, so much! This is the best thing ever!” I exclaimed and took another sip of hot cocoa.

This was just what I needed after that Eris situation. I glanced over at the exit and saw Eris. She was covered in blood and looked terrified. But once I blinked, she was gone. Sophi laughed and smiled at me. “You’re welcome, Janyne.” I smiled softly but couldn’t stop glancing at the exit.

It was now two fifty-three in the afternoon which meant school was over thirty-three minutes ago. I stood inside the art class waiting for my friends to come. Unfortunately, I was the only one in here since everyone went home early to avoid the snow- besides Mr. Campbell of course, who was only leaving us with a pitcher of hot cocoa and some cups. He was also packing up to leave because of the snow.

“Alright, make sure you keep this place clean. I’d stay a bit longer, but I’ve got to pick my daughter up from school.” That was his way of saying ‘sorry, but you’re on your own, kid’.

“Don’t worry Mr. Campbell, it’ll only be four of us in here. We’ll make sure to keep this place nice and neat. And we’ve got the other teachers down the hall if anything happens.” I replied and put my bag down on a table.

“Okay, I’m trusting you.” He grabbed all his belongings and headed towards the back door. “See you tomorrow, Janyne.” “Bye Mr. Campbell, have a nice day!” I called out before the door closed, leaving me in here all by myself.

That didn’t last long though; a knock came from the front door, and I could see Sophi waving through the small window.

“Sorry we’re late. We had to go find my brother.” Libby apologized when I opened the door for them.

“I don’t even wanna be here,” Ben groaned and dropped himself on a chair. We all ignored him. It would’ve been funny if he fell though.

“That’s fine, Mr. Campbell just left,” I grinned at Libby and walked over to the table near his desk. “And look what he left us!” I motioned towards the pitcher and cups. “I want hot chocolate!” Ben shouted and rushed over to the table, almost tripping over his shoe.

“None of you saw that.” He glanced at all of us, then at the hot coco. “I did,” I smirked and moved the cups away from him. “I thought you didn’t wanna be here?” He scoffed and furrowed his eyebrows.

“That was before I knew about the hot chocolate. Now, gimme a cup.” He demanded rudely. “Hmmm, no.” I replied. I could see Sophi and Libby staring between the two of us, worried for what’ll happen next.

“Fine,” I took out a cup from the stack and poured hot cocoa in it.

“I’m glad you know to listen to a man when he speaks to you.” Ben crossed his arms and waited for his drink.

“Sorry, but the only men I listen to are my father and my teachers,” I stared him dead in the eyes and took a sip from the hot coco. It burned my tongue, but there was no way I was going to let him see my pain.

“But since none of them are here, there’s no man to listen to.” I finished and passed out cups to Sophi and Libby. Ben glared at me and flipped me off. “Goddamn bitch,” Ben snarled.

“I’m glad you know what you are.” I placed my hot coco on the table next to Libby’s and Sophi’s. None of us took out our drawing equipment yet; the hot cocoa was just too good. Ben continued to mutter incoherent words and phrases under his breath while the three of us enjoyed our hot cocoa.

“Well, he’s pissed off,” Libby sighed and took a quick glance at her brother who was currently giving me a death glare.

“Over hot cocoa?” Sophi asked in disbelief. Even though Libby told her all the horrible things he’s done, it still came as a shock to her when he did petty stuff like this.

“Well, that’s his own fault. No one told him to disrespect me.” I scoffed and drank my hot coco. Ben paced around the room and grumbled every time he looked at me. I watched him stand next to the shelf Mr. Campbell displayed some of the student’s artworks on. He was tapping his foot in annoyance and his tapping grew evidently faster, creating an echo in the room. “Hey, could you stop doing that? It’s kind of annoying.” I told him.

He looked at me like I’d said the most disgusting thing he’d ever heard. “Why are you even talking to me? You are so-” “I’m bored. You guys wanna draw now?” I asked my friends, completely ignoring Ben. “UGH!” Ben yelled and punched the bookshelf in anger. Some of the items on the shelf started to shake, and some of the smaller ones fell over.

But the one thing that caught my attention was the vase at the top. It was blue with white stripe designs on it, and it was shaking. “Oh no,” I rushed out of my seat and ran over to the shelf, but I was too late. The vase fell with a loud ‘crash’, and the energy in the room shifted. “Ben! Look at what you did! You broke the vase!” Libby yelled at her brother.

I knelt next to the vase and picked up one of the pieces. I could hear Libby and Ben arguing, but it seemed distant. I studied the piece of glass in my hand and brushed my finger over it. ‘Why does it feel so familiar?’ I thought. My mind flashed images of me yelling, a person’s ripped-up body, and a huge black creature with wings.

Should "Shadow Killer" be turned into a novel?