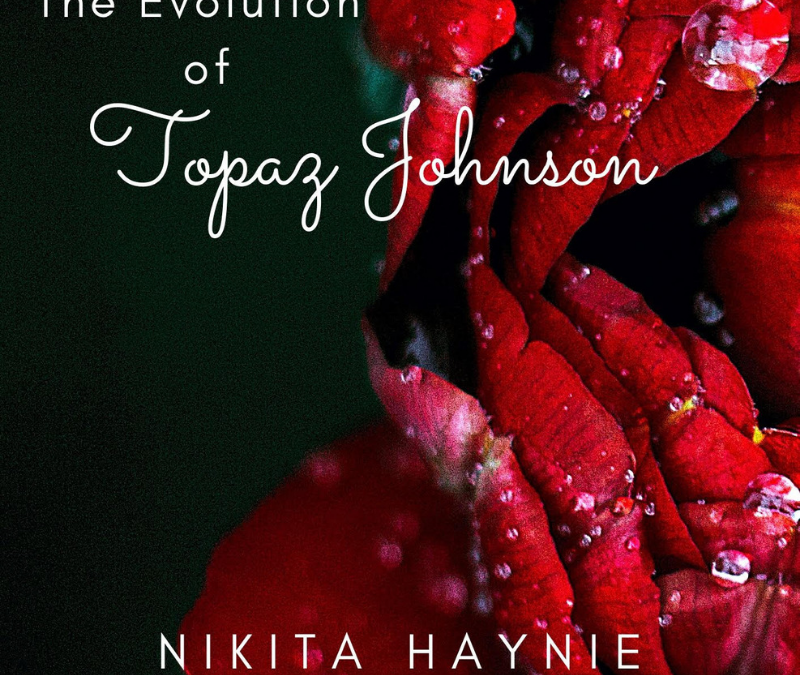 The Evolution of Topaz Johnson by Nikita Haynie

TOPAZ JOHNSON JUMPED at the vibration of the phone, startled out of sleep. She rolled over, peeked at the alarm clock, and groaned. She had two hours left before the alarm went off, she told Kelsey it would be helpful to keep his phone on silent on nights he knew she had to get up early.

Who could be calling at three-thirty in the morning? They went through this every time he spent the night. Topaz tried to nestle back under the cover, rolling her eyes at the vibration of the phone again. Kelsey was sound asleep with no intention of silencing his phone.

It was probably his overbearing boss texting him leads on the next story she wanted him to pursue. His boss was apt to call several times throughout the day and into the late evening. Everything related to the hottest and latest news was urgent.

Topaz gave up. She reached over and snatched up the phone. Before she could put the phone up to her ear fully, she could hear a woman’s voice. “Kel, I know it’s late, but I finally took the test and it’s positive.” Her heart sank and she looked at the phone again hoping she had misread the Caller ID. But it read Boss Lady Davenport.

“Kel are you there?”

“This isn’t Kel,” Topaz spoke into the phone.

“This is Desiree. Kel’s girlfriend. Who is this?”

Topaz closed her eyes and thought maybe she was dreaming as all kinds of responses whirled in her mind. Sometimes she wondered what her and Kelsey’s kids would look like. If they would have his mannerisms and her hazel eyes. Would they have a ranch style house with a massive backyard for the kids to play in?

Topaz had attempted to discuss marriage and kids last year on their four year anniversary, but Kelsey was adamant about putting the notion off for a few more months. He was pushing to get promoted at work. In fact, when he’d received the promotion six months ago, Topaz thought surely a proposal was around the corner, but she vowed to no longer bring it up for discussion.

She took a deep breath. “Desiree, I’ll have Kelsey return your phone call when he wakes up.”

Topaz could hear Desiree suck her teeth. “I mean you can’t wake him? This is important.”

The audacity of this woman! Can I wake him? If I wake him, he may not be alive in the next few hours. “He’ll call you tomorrow,” she said swiftly before ending the call.

Kelsey moved and made a soft moan. He was sleeping like a baby, with no knowledge that his indiscretion had been revealed in the middle of the night. Topaz felt strangely calm watching him sleep. Maybe this woman had accidentally dialed the wrong number? Maybe this was a twisted joke that his jealous ex was playing.

When they first began dating, his ex was relentless in her quest to win him back, but Kelsey reassured her he was done with her. She sighed as she looked at her man, bone structure of a model, dark and handsome too. He was the one who had pressed her about them moving in together just two months ago.

She wanted to strangle him with the pillow, but that would make for an interesting headline on the local news: Scorned girlfriend kills unfaithful boyfriend in the middle of the night.

Topaz had a sudden realization that cut her skin deep. Until this phone call, she hadn’t realized the lengths he was willing to go to be purposefully deceitful. She’d always prayed for Kelsey and his philandering tendencies, hoping he’d put them behind him after college. She wanted to believe he had grown up.

He pursued and wooed her relentlessly until he wore her defenses down. They were the “it” couple on campus and everything was perfect until it wasn’t. The first time she caught him cheating was when she returned early from studying abroad their junior year. They communicated every day the two months she was away, the element of surprise made her more excited to be reunited with her love.

She remembered pulling the spare key from under the mat and turning the key in the door. At first glance everything seemed normal, laying the key on the coffee table. She heard laughter upstairs, time seemed to a standstill as she walked up the stairs.

When she opened his bedroom door she stood paralyzed by what she saw. Kelsey and her friend, Andrea Wilson, naked engaging in adult recreation. They both jumped at the sight of Topaz scrambling to cover themselves like Adam and Eve in the garden. Kelsey was the first to respond to her presence.

“Topaz…what are you doing here?” The question wasn’t rhetorical however his tone implied she shouldn’t be here enraging her more. Before she could respond she lunged at Andrea screaming expletives.

Kelsey attempted to break them up repeating, “Topaz get your hands off of her!”

Even now she could hear his requesting ringing in her ears. Topaz was astonished at his notion to protect Andrea, but disregard for protecting their relationship by not sleeping with another woman let alone her friend. Nonetheless, the fight ended with Andrea needing stitches and Kelsey apartment damages totaling over five hundred dollars.

Kelsey was mortified and spent months begging for forgiveness with a variety of grandeur gestures. The one slip up with Andrea was the catalyst to the occasional slip up here and there until it was the normalcy of their relationship. The tipping point of Kelsey rectifying his behavior came when they broke up after graduation.

A year passed and they saw each other at Homecoming, the interaction was brief but left an impression on Kelsey allegedly. He pursued her and reassured he had become the man she needed. Now she was staring at the changed man. The man she believed when he said he was working late who hadn’t changed but blended in like a chameleon.

Should "The Evolution of Topaz Johnson" be turned into a full-length novel?