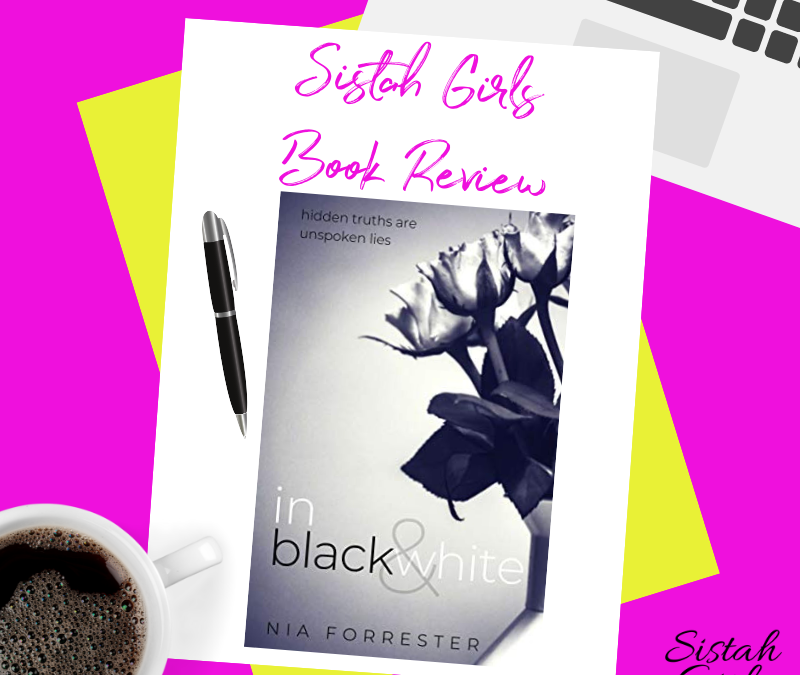 Nia Forrester has done it again: written a novel that had me so hooked I lost track of time and stayed up way too late reading and not wanting the story to end.

Set in a leafy suburb of Philadelphia, In Black & White immediately drops us into what is every parent’s nightmare–the disappearance of a child. In this case, it’s the disappearance of 18-month-old Samara, the daughter of interracial couple Noah and Dana.

Samara’s abduction and the subsequent fallout around it mark the beginning of a fascinating story that is in parts mystery and a thoroughly modern story of love on the rocks.

Forrester is a master at crafting three-dimensional characters. Dana and Noah are no different. From the first chapter when we learn the status of their marriage, we are given a very realistic, sometimes heart-breaking, sometimes frustrating portrayal of a couple who come from different worlds.

Noah is the product of privileged, old Pennsylvania money. Dana is his polar opposite–raised in a working-class neighborhood in Baltimore by her grandmother and her older sister, she has struggled to get used to the life of privilege being Noah’s wife affords, especially since her skin color will always mark her as out of place in the world that Noah comes from.

Already when they first meet at their mutual friend Beck’s engagement party, Dana has decided that she will not be charmed by Noah or his innate confidence. And when they finally come together at Beck’s wedding, we understand that their relationship will not be easy, no matter how much Noah’s money can sometimes cushion the barbs and potholes along the way.

Tackling interracial marriage in the age of Trump

As someone who writes about interracial and multicultural relationships, I know is not easy to write about these relationships today when racial tension and blatant bigotry and xenophobia seem to poison everything in their wake.

Nia and I discussed this when we met recently while I was in the States. Some readers only want the fantasy version of an interracial relationship—the wealthy hero, a sumptuous setting and over-the-top whirlwind romance. And as much as we may enjoy reading those sorts of stories, more realistic stories about love and relationships also need to be told.

Perhaps that’s why neither of us writes traditional romances. We are too invested in telling love stories that peel away the layers of relationships, beyond the boy-meets-girl meet cute and chemistry between the romantic leads.

It’s one of the reasons why I became enthralled with In Black & White. We learn from the first chapter that Dana and Noah’s marriage is not picture-perfect, no matter the façade everyone else in their life chooses to see. They are on the edge.

Their young daughter has been abducted and Dana and Noah’s marriage is on unstable ground thanks to his infidelity and Dana’s own misgivings about retaining a sense of self and her inability to feel completely at home in the privileged world Noah has always inhabited.

One of the aspects I loved about In Black & White is how Forrester deftly takes us through the couple’s history and its relevance to their separation. These snippets of their shared past help the reader understand who Dana and Noah were when they first met and what attracted them to one another as well as what has driven them apart.

Neither Dana nor Noah is perfect. They are flawed, say and do things that sometimes make you cringe or groan in frustration, and this level of authenticity and honesty about love is captivating.

This is not a sugar-coated, fantasy-laden love story, so if that’s what you’re looking for, then this isn’t going to be the book for you. But if you’re in the mood for a very realistic look at a modern love and marriage, racial and socioeconomic differences (and how it can make or break a couple), and how the disappearance of a child can unveil secrets, then you’re going to love In Black & White.

If you’ve read the book let me know your thoughts in the comments section!