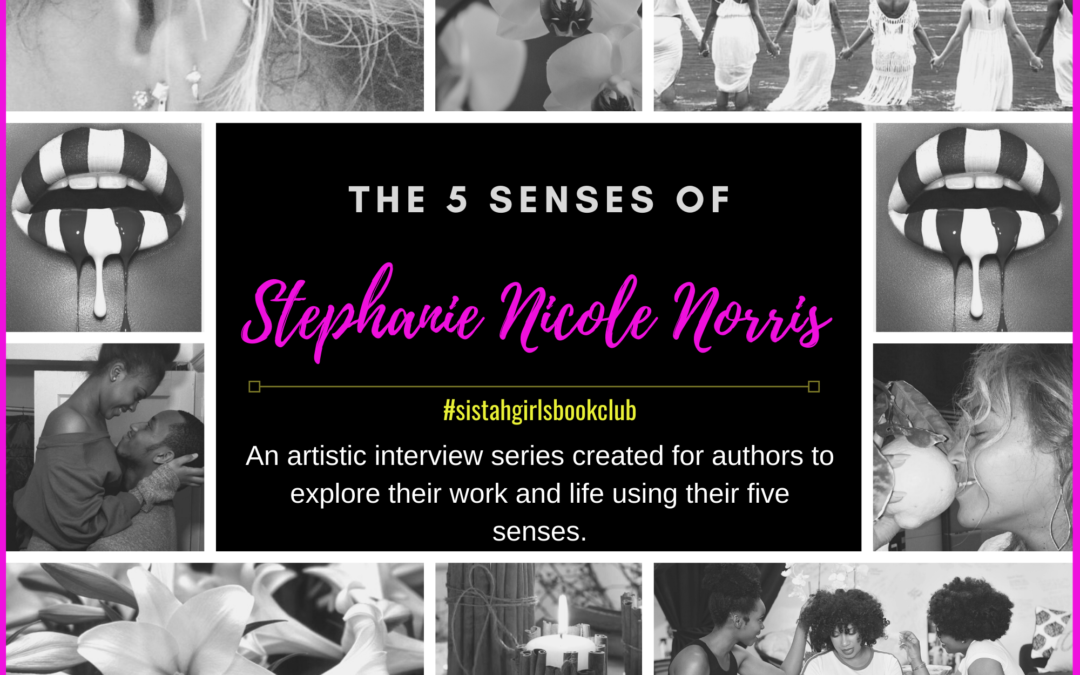 The Five Senses Of… is a unique interview series created for authors to explore their work and life using their five senses. It is designed to tap into their sense of taste, touch, smell, sight, and sound to give readers a glimpse of the author behind the pen.

Stephanie Nicole Norris is an author from Tennessee, with a humble beginning. After becoming a young adult, her love for romance sparked, leaving her captivated by heroes and heroines alike.

With a big imagination and a creative heart, Stephanie penned her first novel in 2012. She went on to write grin-inducing romance and has received multiple literary awards. 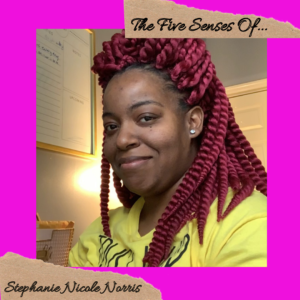 SGBC: What inspired your first project?

Stephanie Nicole Norris: I had always been the type to “daydream.” I’d be spaced out at any given time, and people would always ask what I was thinking about. At first, I felt silly about the true nature of that response because I had a whole story happening in my head, and for a while, it felt ridiculous.

These were detailed stories too. People were going to work, fighting, making love, and sometimes action-packed scenes that would have me completely under a spell.

I was living in Atlanta and working a clerical job in Alpharetta. One night I’m in bed and can’t sleep because these people were at it again. I asked myself what was I going to do about what was happening, and I had a real live lightbulb moment.

Write it down, Stephanie.

The next thing I know, I’m telling my then-boyfriend now, hubby, I think I’m going to write a book. He didn’t bat an eye. He said, “Go for it!” I never imagined that would be the start of a career for me. But eleven years later, here we are.

Sexy, Intoxicating, Addictive. I write romance that grips you and makes you feel.

Speaking of feeling. It’s a strong, intense love that heats your body, swells your heart, and makes you fall in love like a Jhene Aiko song…

SGBC: Using the five senses, what does your love look, feel, taste, smell, and sound like?

Stephanie Nicole Norris: My love looks like…a room filled with roses with petals sprinkled on top of the bed. 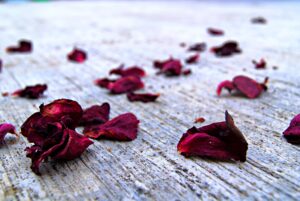 Stephanie Nicole Norris: Black Love is beautiful. It’s the start of a friendship that spawns into a mutual understanding. Trust lives there, respect, honor, dignity, intimacy. It’s an infinite thing between black people that can’t be deterred. Black love is strong, bold, and beautiful. It uplifts when the situation presents itself. And with the proper care, it’ll blossom, always.

SGBC: What simple thing do you find joy in?

Stephanie Nicole Norris: Watching my son smile and laugh. Watching him play and enjoy himself has to be the simplest thing I find joy in. Mainly because he was born a micro-preemie at one pound three ounces. I was told he wouldn’t survive or have a quality of life. So to see him smile, laugh, and play gives me the most joy, period.

SGBC: What writing routines do you have?

Stephanie Nicole Norris: I subscribe to Word Genius. Every day I’ll get a different word sent to my email. Often I’ll grab a notebook and use that word in a sentence.

I’ll write five different sentences that have nothing to do with the other to see what type of scene or dialogue I can come up with. It’s my way of strengthening my creativity. I surprise myself a lot by doing this. Good vibes and Great scenes come from these exercises.

SGBC: What have been some of your favorite scents this year?

Stephanie Nicole Norris: Oooh! I am a candle lover! Seriously, I can spend upward of $200 a month on candles. I try to shop with as many black-owned businesses as possible.

BlkSunflower has some great scents! The last order I purchased from them included: Tall, Dark, & Handsome – this is a chocolate + cranberry + coconut scent. Have mercy!

All That Jazz – this is an almond + mango scent. Peaches & Cream – this speaks for itself, right? Fireside Vibez – this is an Alderwood & Honey smell. You’ve got to try these!

Sistah Girls, this was such a fun interview, be sure to keep up with Stephanie Nicole Norris