Young Adult novels are LIT this Fall, there are so many dynamics and nuances that are being written about that it’s hard to keep up. I remember when I was a teen I didn’t have this type of selection at my disposal. Times have changed, you can read a novel about a black girl who is a gamer and another about a black girl who is trying to hold onto romance while being HIV-positive.

Black writers are breaking down barriers, they are reimagining the world of science fiction and including black people. They are writing openly about same-sex relationships and discussing what it means to be a young black adult in America today.

This list includes books I believe would be great conversation starters. Adults can read YA and thoroughly enjoy them and if you have a young adult these are great novels that you both can read and then have a real discussion afterward. 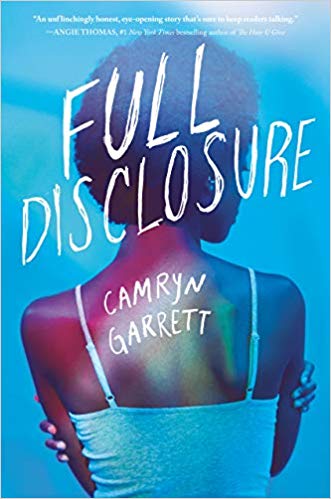 Simone Garcia-Hampton is starting over at a new school, and this time things will be different. She’s making real friends, making a name for herself as student director of Rent, and making a play for Miles, the guy who makes her melt every time he walks into a room.

The last thing she wants is for word to get out that she’s HIV-positive, because last time . . . well, last time things got ugly. Keeping her viral load under control is easy, but keeping her diagnosis under wraps is not so simple. As Simone and Miles start going out for real–shy kisses escalating into much more–she feels an uneasiness that goes beyond butterflies.

She knows she has to tell him that she’s positive, especially if sex is a possibility, but she’s terrified of how he’ll react! And then she finds an anonymous note in her locker: I know you have HIV. You have until Thanksgiving to stop hanging out with Miles. Or everyone else will know too

By day, seventeen-year-old Kiera Johnson is an honors student, a math tutor, and one of the only Black kids at Jefferson Academy. But at home, she joins hundreds of thousands of Black gamers who duel worldwide as Nubian personas in the secret multiplayer online role-playing card game, SLAY. No one knows Kiera is the game developer, not her friends, her family, not even her boyfriend, Malcolm, who believes video games are partially responsible for the “downfall of the Black man.”

But when a teen in Kansas City is murdered over a dispute in the SLAY world, news of the game reaches mainstream media, and SLAY is labeled a racist, exclusionist, violent hub for thugs and criminals. Even worse, an anonymous troll infiltrates the game, threatening to sue Kiera for “anti-white discrimination.”

Driven to save the only world in which she can be herself, Kiera must preserve her secret identity and harness what it means to be unapologetically Black in a world intimidated by Blackness. But can she protect her game without losing herself in the process?

Kingdom of Souls by Rena Barron

Born into a family of powerful witchdoctors, Arrah yearns for magic of her own. But each year she fails to call forth her ancestral powers, while her ambitious mother watches with growing disapproval.

There’s only one thing Arrah hasn’t tried, a deadly last resort: trading years of her own life for scraps of magic. Until the Kingdom’s children begin to disappear, and Arrah is desperate to find the culprit.

She uncovers something worse. The long-imprisoned Demon King is stirring. And if he rises, his hunger for souls will bring the world to its knees… unless Arrah pays the price for the magic to stop him.

With the Fire on High by Elizabeth Acevedo

Ever since she got pregnant freshman year, Emoni Santiago’s life has been about making the tough decisions—doing what has to be done for her daughter and her abuela.

The one place she can let all that go is in the kitchen, where she adds a little something magical to everything she cooks, turning her food into straight-up goodness.

Even though she dreams of working as a chef after she graduates, Emoni knows that it’s not worth her time to pursue the impossible. Yet despite the rules she thinks she has to play by, once Emoni starts cooking, her only choice is to let her talent break free.

There are no monsters anymore, or so the children in the city of Lucille are taught. Jam and her best friend, Redemption, have grown up with this lesson all their life.

But when Jam meets Pet, a creature made of horns and colors and claws, who emerges from one of her mother’s paintings and a drop of Jam’s blood, she must reconsider what she’s been told.

Pet has come to hunt a monster, and the shadow of something grim lurks in Redemption’s house. Jam must fight not only to protect her best friend, but also to uncover the truth, and the answer to the question–How do you save the world from monsters if no one will admit they exist?

Aster, the protector, Violet, the favorite, Tansy, the medic, Mallow, the fighter, and Clementine, the catalyst. THE GOOD LUCK GIRLS. The country of Arketta calls them Good Luck Girls—they know their luck is anything but.

Sold to a “welcome house” as children and branded with cursed markings. Trapped in a life they would never have chosen. When Clementine accidentally kills a man, the girls risk a dangerous escape and harrowing journey to find freedom, justice, and revenge in a country that wants them to have none of those things.

Pursued by Arketta’s most vicious and powerful forces, both human and inhuman, their only hope lies in a bedtime story passed from one Good Luck Girl to another, a story that only the youngest or most desperate would ever believe. It’s going to take more than luck for them all to survive.

The Stars and the Blackness Between Them by Junauda Petrus

Told in two distinct and irresistible voices, Junauda Petrus’s bold and lyrical debut is the story of two black girls from very different backgrounds finding love and happiness in a world that seems determined to deny them both.

Trinidad. Sixteen-year-old Audre is despondent, having just found out she’s going to be sent to live in America with her father because her strictly religious mother caught her with her secret girlfriend, the pastor’s daughter. Audre’s grandmother Queenie (a former dancer who drives a white convertible Cadillac and who has a few secrets of her own) tries to reassure her granddaughter that she won’t lose her roots, not even in some place called Minneapolis. “America have dey spirits too, believe me,” she tells Audre.

Minneapolis. Sixteen-year-old Mabel is lying on her bed, staring at the ceiling and trying to figure out why she feels the way she feels–about her ex Terrell, about her girl Jada and that moment they had in the woods, and about the vague feeling of illness that’s plagued her all summer. Mabel’s reverie is cut short when her father announces that his best friend and his just-arrived-from-Trinidad daughter are coming for dinner.

Mabel quickly falls hard for Audre and is determined to take care of her as she tries to navigate an American high school. But their romance takes a turn when test results reveal exactly why Mabel has been feeling low-key sick all summer and suddenly it’s Audre who is caring for Mabel as she faces a deeply uncertain future.

Look Both Ways: A Tale Told in Ten Blocks by Jason Reynolds

This story was going to begin like all the best stories. With a school bus falling from the sky. But no one saw it happen. They were all too busy—

Daughters of Nri: The Return of the Earth Mother series by Reni K Amayo

A gruesome war results in the old gods’ departure from earth. The only remnants of their existence lie in two girls. Twins, separated at birth. Goddesses who grow up believing that they are human. Daughters Of Nri explores their epic journey of self-discovery as they embark on a path back to one another.

Strong-willed Naala grows up seeking adventure in her quiet and small village. While the more reserved Sinai resides in the cold and political palace of Nri. Though miles apart, both girls share an indestructible bond: they share the same blood, the same face, and possess the same unspoken magic, thought to have vanished with the lost gods.

The twin girls were separated at birth, a price paid to ensure their survival from Eze Ochichiri, the man who rules the Kingdom of Nri. Both girls are tested in ways that awaken a mystical, formidable power deep within themselves. Eventually, their paths both lead back to the mighty Eze.

But can they defeat the man who brought the gods themselves to their knees?

Who Put This Song On? by Morgan Parker

Trapped in sunny, stifling, small-town suburbia, seventeen-year-old Morgan knows why she’s in therapy. She can’t count the number of times she’s been the only non-white person at the sleepover, been teased for her “weird” outfits, and been told she’s not “really” black. Also, she’s spent most of her summer crying in bed. So there’s that, too.

Lately, it feels like the whole world is listening to the same terrible track on repeat–and it’s telling them how to feel, who to vote for, what to believe. Morgan wonders, when can she turn this song off and begin living for herself?

Loosely based on her own teenage life and diaries, this incredible debut by award-winning poet Morgan Parker will make readers stand up and cheer for a girl brave enough to live life on her own terms–and for themselves.