#BOOKREVIEW Cheating The Future For The Past by Chenell Parker #SpoilerFree 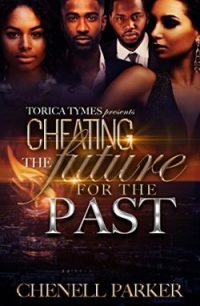 FINALLY!! Can I just say that I am beyond happy to get a book that spotlights Jaden. He was featured in Parker’s You’re My Little Secret series so readers got snippets of him. However, this series puts us up close and personal with all the craziness that is Jaden. And I loved EVERY minute of it.

Cheating The Future For The Past has three couples circling one another in the drama department. First up Keller and Leo; Keller and Leo have been together for a few years but Leo’s cheating has her ready to walk away. Well, his cheating and his inability to keep his hands to himself. You see Leo has zero respect for women. Unfortunately he has no problem using his fists when angry with Keller. Sadly it’s not that easy for her to walk away… After her putting up with so much you’ll start to wonder what will it take for her to actually leave him and NEVER look back.

The next couple is Kia and Jaden. Kia and Jaden have been together for years. Since they were teens and they have a ten year old daughter, Jaylynn. Jaden’s cheating ways are a constant problem between them and right now they both have a stalker chick that is disrupting their peace. It leads Kia to make a bad decision, one that unleashes the beast in Jaden. A blood thirsty beast.

The last couple is Tigga and Anaya. These two are together…but not together. Basically Tigga has found himself in a loveless relationship with the mother of his kids. Anaya is all out for self using her kids as the leverage. With Tigga offering her a lifestyle that she’s grown spoiled and accustom to she tries to hold on to a man that is ready to walk away. Nevertheless, she attempts to hold on to him as long as possible. Only Anaya has secrets and you know that things done in the dark eventually come to light.

My thoughts…
What I did not like was how naive Keller was with her punk of a boyfriend Leo. That drove me CRAZY. Literally…LIKE WTH. What I loved was Jaden in all his crazy. It made for some very entertaining scenes. PLUS I loved the small features from some of the characters in Parker’s You’re My Little Secret series.

I also find it hilarious that multiple characters are running on crazy up in this book and seem to be oblivious to it. That’s kind of true to life, a bunch of folk walking around that are in need of meds. Smdh. Well except Jaden cause he knows that he himself is crazy. LOL!

The writing…
I thought the writing was good! I was highly entertained. This was a quick read that you won’t want to put down. Yes, there were a few grammatical errors but overall the flow was on point. We get multiple points of view as it switches up from one character to the next. *Grins* Just the way I like it! LOL! I like to be in everybody’s head!

To buy or Not to Buy? I say buy. Go 1click!
Series: Yes. This is the first book in a new series as far as I know.
Plot/Storyline: There’s a lot going on with so many couples featured. Overall you can follow along easy. There are a few twists in there that will catch you off guard.
Writing: Good, Hilarious with all around entertaining characters

Now go forth and read, then come tell us what you thought about it! If only just a few words, reviews are important to authors.