What happens when the WHY in “Why I started” changes? 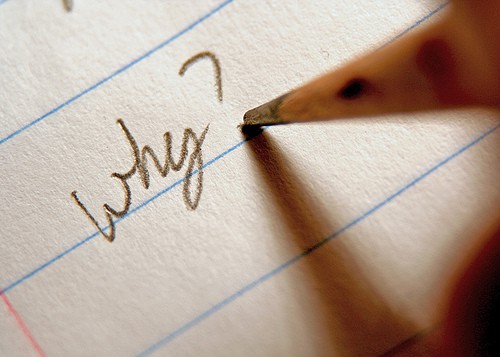 Do you remember why you started? Has it changed?

“Remember why you started.” You can have any hardship, it can be with your business, school, job, the list goes on, and the positive answer to your current problem is dressed up in a cool meme that says, “Remember why you started.” And somehow that is supposed to give you the push you need to keep going. I was sitting one day going through a “hardship” the type where the world is ending because ____ is happening, and I saw the white background with the bold pink letters that said, “Remember why you started.” I read it out loud, I thought by remembering why I started then I would magically have the urge to keep going based on the past. I didn’t feel very different, I decided to really give it a shot and write it down. I took out a pad and I wrote down everything I currently do and added WHY at the beginning. Why did I start blogging? Why did I create Dorm Room Television? Why do I have this urge or need to help Black women and the Black community? The questions became endless, you can apply the why to just about anything that you are currently doing. It wasn’t hard to come up with a grand answer for the WHY. What became hard was applying it to real time. I had grown up, lived some years, and things changed. I realized one important thing the positive meme left out…the WHY can change with time. 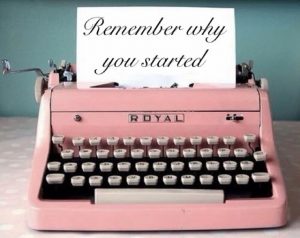 The WHY had changed for me. It wasn’t hard to remember why I started blogging. What was hard was coming up with why I STILL did it. I’m not the college kid who had so much shit on her chest that if she didn’t write she thought she would literally explode. Well, I still might have that problem, but what I cared about has changed. I still write, but why I started writing is not why I currently write. Why I blog today is not the same why back when I first started. I started blogging because it was a way to speak and because it was kind of cool. It was owning my words and publishing them without waiting for a major magazine to tell me if my shit was worthy enough. If I had something to say I could write it, publish it, and promote it. Sure I wasn’t getting trillions of dollars but someone heard my voice and that’s all I cared about. Flash forward to 2016 the why has changed drastically. I’ve always viewed writing as an art, it just is, we can go back and forth all day about it but I’d win. Back then I didn’t view myself as a writer, hell I didn’t even view myself as a blogger really. I just thought I had the right to say whatever I wanted, and because we all were given the platform to speak (thank you internets) then I thought I should join in.

I had a voice, but back then I wanted to be speak to be heard, never mind the topic. In 2016 I still have a lot of shit on my chest, but I also have clear voice and a stronger message. When I wrote my short film I started writing it because I was inspired to make my words visual. That didn’t change, however I now realize the power of the pen. The power and the strength of words, my words. By not calling myself a writer when I started to write publicly (on internet paper) it took the commitment level down and it was something I could easily escape from. The silent theory that I believe many writers live by goes something like this… if you don’t call yourself a writer you are not bound by anything to write consistently. It the coolest shit a writer could come up with and nobody says anything to dispute it. But I was growing up, learning about myself, and becoming more confident. The WHY had changed.

The reason why you start something might not be the reason you are still doing it.

Nobody ever tells you that the WHY can change. It’s like this secret that positive memes keep leaving out. Why do I still write now? Why do I still run Dorm Room Television now? Why do I still want to help Black women and the Black community now? Why do I still want to help young black millennials now? Those four questions I had to figure out and have a clear answer. Sometimes we start doing something and down the road the why changes but we keep doing it based on when we first started. People change, the reason why you start something might not be the reason you are currently doing it. What has a lot of people waking up in the middle of the night is not the anxiety or the stress that comes along with the job, its wondering if you are still doing it for the right reasons. When the goal is not the same goal that you started out with the why has changed. When the why changes, you have to figure out if its still in alignment with what you are currently doing, if its not then you have to get back in formation, or do the hardest thing most people don’t ever want to do. Move on. Moving on doesn’t mean you gave up or you quit, moving on means the why changed and it doesn’t currently fit what you are trying to accomplish now.

The WHY changed for me drastically, the ripple that it’s causing or about to cause makes me nervous but it also allows me to breathe. I’m not trying to fit something in a mold that no longer applies to me. It’s like getting a puzzle and trying to fit pieces together that simply doesn’t fit. You struggle with it, you wiggle it, and you get frustrated and try to force it. But if its not the right piece it will not fit no matter how hard you try. So do you remember why you started? The better question is, why do you still do it?

Y’all know I love a good comment, so comment below, and let a sistah know what you’re thinking. If it’s private email me!