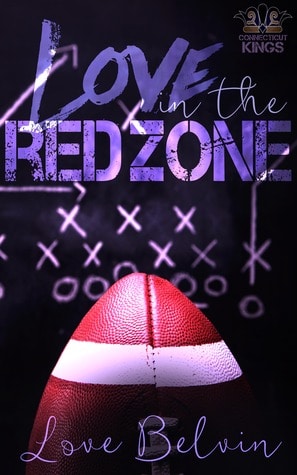 Love In The Red Zone is indeed a 5 STAR READ!

I know this review looks long but trust me I barely scratch the surface. I LOVE LOVE LOVED THIS BOOK! Believe me when I say that a 5 star book is dangerous, well at least for me they are. 5 star reads will have you emotionally spent, that’s exactly what this book did to me. I don’t give up that 5th star easily, however Love In The Red Zone straight up stole the 5 stars right out of my hand! These characters, their stories and their relationship totally got the best of me. And I… I NEED MORE JADE & TRENT!

Trent Bailey was a superstar quarterback for the Connecticut Kings. A conviction takes that status away when he is sentenced and spends 18months in jail. Two years later and the only field time Trent gets is when assisting a friend that coaches a pee wee football team. It’s while assisting the pee wee league Trent meets Jade Matthews…

Jade is a young mom struggling to make ends meet. Pretty much struggling just to keep a roof over her and her son Kyree’s head. Right when everything starts to close in around her she receives a helping hand from an unlikely source. This unlikely source aka Trent lives a VERY private life. He basically goes against all of that to help a young mom and her son. Both are uneasy and unsure about their arrangement. Regardless of their uneasiness they push forward and make it work.

Not much time passes when Jade starts to see Trent in a different light. She’s attracted to him, decides that she wants him and goes above and beyond to win his affection towards her. Meanwhile, things begin to fall in to place for Trent. His desire is to get back on the field and the path to do so is placed right before his feet. He has the discipline, the physique and the determination to do it. Almost simultaneously the new woman in his life positions herself as well. Only Trent is not exactly ready to fully accept her.

‘Yeah, she was on hard times now, but that didn’t mean she couldn’t sniff out a baller for milking.’ Trent’s Inner monologue

Jade and Trent come together in a wild fiery raging passion. The problem is, while Jade puts herself out there with her heart on the line, Trent continues to hold back. His past has him in a place where he finds it hard to trust people. I should note here that he is upfront about his trust issues.

But Jade, homegirl is a fighter and she claws… I mean, she seriously fights for Trent, claiming her position at his side. His reaction to her tactics…LOL! And yes, this chick is tactical with it. His reactions make me smile and love him even more.

Jade- I think readers will fall hard for this couple! I loved Jade she was smart, fierce and skillful at getting what she wanted. Which was Trent and you know what I can’t blame her cause I’m digging him myself. She was jealous, possessive, protective and I loved every second! I wouldn’t really consider her a manipulator because once it was made known to Trent that she wanted him she went on in such a manner with not just getting him but keeping him. More importantly she was real about it. And I think this made her twice as endearing to me.

Trent- I like that Trent was smart. He was not one who’s quick to fall for the okey doke. He did however fall for Jade quicker than I thought but was a bit slower to reveal his heart to her. He had moments or confession moments I should say where he kept it real with her. But he was never one to put it all out there on the line. He held back some, not naturally though, it was more out of his inability to trust anyone. Because believe me Trent came through when necessary for Jade, no doubt.

Love in the Red Zone by: Love Belvin

The writing
I think Belvin did an excellent job with layering her characters. It’s part of her style. Not only to layer them but to show their growth as well. It’s truly a strength in her writing that honestly not many can pull off or balance very well. The story carried weight. The characters, even some secondary characters had meat to their bones as well as some skeletons in the closet. The sex scenes were pure F I R E.

Sidebar: If you’re a true fan I’m sure you enjoyed the great appearances made by Love’s leading characters from previous books.

To buy OR Not to buy? BUY! Go 1click!
Series: Yes, this is book 1 in The Connecticut Kings Series.
Story/plotline: Well written. Well defined story and characters. Pulls you in from the very beginning. And when it ends you still want more.
Recommendation: MUST READ!
Steam Factor: On a scale of 1-10 I say hands down 10 it was on point!