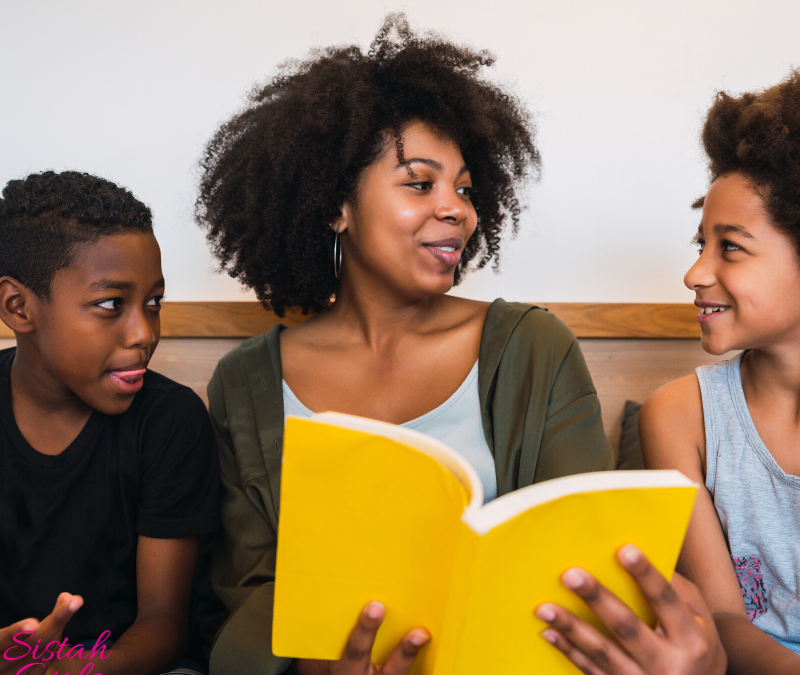 Books You Can Read With Your Black Sons

Hey, Sistah Girls Hey! Being a mom to an incredible Black king I am always in search of some great books that make him feel good to be black, intelligent, and male.

While there are some beautiful stories out there I want to share with you the ones that we have read together and personally loved.

As Brave as You by Jason Reynolds

When two brothers decide to prove how brave they are, everything backfires—literally—in this “pitch-perfect contemporary novel” (Kirkus Reviews, starred review) by the winner of the Coretta Scott King – John Steptoe Award.

Genie’s summer is full of surprises. The first is that he and his big brother, Ernie, are leaving Brooklyn for the very first time to spend the summer with their grandparents all the way in Virginia—in the COUNTRY! The second surprise comes when Genie figures out that their grandfather is blind. Thunderstruck, Genie peppers Grandpop with questions about how he hides it so well (besides wearing way cool Ray-Bans).

How does he match his clothes? Know where to walk? Cook with a gas stove? Pour a glass of sweet tea without spilling it? Genie thinks Grandpop must be the bravest guy he’s ever known, but he starts to notice that his grandfather never leaves the house—as in NEVER. And when he finds the secret room that Grandpop is always disappearing into—a room so full of songbirds and plants that it’s almost as if it’s been pulled inside-out—he begins to wonder if his grandfather is really so brave after all.

Then Ernie lets him down in the bravery department. It’s his fourteenth birthday, and, Grandpop says to become a man, you have to learn how to shoot a gun. Genie thinks that is AWESOME until he realizes Ernie has no interest in learning how to shoot. None. Nada. Dumbfounded by Ernie’s reluctance, Genie is left to wonder—is bravery and becoming a man only about proving something, or is it just as important to own up to what you won’t do?

Justyce McAllister is a good kid, an honor student, and always there to help a friend—but none of that matters to the police officer who just put him in handcuffs. Despite leaving his rough neighborhood behind, he can’t escape the scorn of his former peers or the ridicule of his new classmates.

Justyce looks to the teachings of Dr. Martin Luther King Jr. for answers. But do they hold up anymore? He starts a journal to Dr. King to find out.

Then comes the day Justyce goes driving with his best friend, Manny, windows rolled down, music turned up—way up, sparking the fury of a white off-duty cop beside them. Words fly. Shots are fired. Justyce and Manny are caught in the crosshairs. In the media fallout, it’s Justyce who is under attack.

Before there was hip hop, there was DJ Kool Herc. On a hot day at the end of summer in 1973 Cindy Campbell threw a back-to-school party at a park in the South Bronx. Her brother, Clive Campbell, spun the records. He had a new way of playing the music to make the breaks—the musical interludes between verses—longer for dancing.

He called himself DJ Kool Herc and this is When the Beat Was Born. From his childhood in Jamaica to his youth in the Bronx, Laban Carrick Hill’s book tells how Kool Herc came to be a DJ, how kids in gangs stopped fighting in order to breakdance, and how the music he invented went on to define a culture and transform the world.

Mondays, there were hogs to slop,

mules to train, and logs to chop.

Slavery was no ways fair.

As slaves relentlessly toiled in an unjust system in 19th century Louisiana, they all counted down the days until Sunday, when at least for half a day they were briefly able to congregate in Congo Square in New Orleans. Here they were free to set up an open market, sing, dance, and play music.

They were free to forget their cares, their struggles, and their oppression. This story chronicles slaves’ duties each day, from chopping logs on Mondays to baking bread on Wednesdays to plucking hens on Saturday, and builds to the freedom of Sundays and the special experience of an afternoon spent in Congo Square.

This book will have a forward from Freddi Williams Evans (freddievans.com), a historian and Congo Square expert, as well as a glossary of terms with pronunciations and definitions.

Voice of Freedom Fannie Lou Hamer  by Carole Boston Weatherford Illustrated by Ekua Holmes  (this is a personal favorite because according to him it ties him to the birthplace of all of the elders in our family.)

Despite fierce prejudice and abuse, even being beaten to within an inch of her life, Fannie Lou Hamer was a champion of civil rights from the 1950s until her death in 1977.

Integral to the Freedom Summer of 1964, Ms. Hamer gave a speech at the Democratic National Convention that, despite President Johnson’s interference, aired on national TV news and spurred the nation to support the Freedom Democrats. Featuring vibrant mixed-media art full of intricate detail, Voice of Freedom celebrates Fannie Lou Hamer’s life and legacy with a message of hope, determination, and strength.

Schomburg: The Man Who Built A Library by Carole Boston Weatherford Illustrated by Eric Velasquez

Where is our historian to give us our side? Arturo asked.

Amid the scholars, poets, authors, and artists of the Harlem Renaissance stood an Afro–Puerto Rican named Arturo Schomburg. This law clerk’s life’s passion was to collect books, letters, music, and art from Africa and the African diaspora and bring to light the achievements of people of African descent through the ages.

When Schomburg’s collection became so big it began to overflow his house (and his wife threatened to mutiny), he turned to the New York Public Library, where he created and curated a collection that was the cornerstone of a new Negro Division. A century later, his groundbreaking collection, known as the Schomburg Center for Research in Black Culture, has become a beacon to scholars all over the world.

I couldn’t play on the same playground as the white kids.
I couldn’t go to their schools.
I couldn’t drink from their water fountains.
There were so many things I couldn’t do.

In this stunning debut picture book, actress Lupita Nyong’o creates a whimsical and heartwarming story to inspire children to see their own unique beauty.

Among these women, you’ll find heroes, role models, and everyday women who did extraordinary things – bold women whose actions and beliefs contributed to making the world better for generations of girls and women to come.

Whether they were putting pen to paper, soaring through the air or speaking up for the rights of others, the women profiled in these pages were all taking a stand against a world that didn’t always accept them.

The leaders in this book may be little, but they all did something big and amazing, inspiring generations to come.

An important book for readers of all ages, this beautifully illustrated and engagingly written volume brings to life true stories of black men in history. Among these biographies, readers will find aviators and artists, politicians and pop stars, athletes and activists.

The legends in Little Legends: Exceptional Men in Black History span centuries and continents, but each one has blazed a trail for generations to come.

A Is For Activist by Innosanto Nagara

A is for Activist is an ABC board book written and illustrated for the next generation of progressives: families who want their kids to grow up in a space that is unapologetic about activism, environmental justice, civil rights, LGBTQ rights, and everything else that activists believe in and fight for.

The alliteration, rhyming, and vibrant illustrations make the book exciting for children, while the issues it brings up resonate with their parents’ values of community, equality, and justice. This engaging little book carries huge messages as it inspires hope for the future, and calls children to action while teaching them a love for books.

Before She Was Harriet by Lesa Cline-Ransome Illustrated by James E. Ransome

We know her today as Harriet Tubman, but in her lifetime she was called by many names. As General Tubman she was a Union spy. As Moses she led hundreds to freedom on the Underground Railroad. As Minty she was a slave whose spirit could not be broken. As Araminta she was a young girl whose father showed her the stars and the first steps on the path to freedom.

An evocative poem and stunning watercolors come together to honor a woman of humble origins whose courage and compassion make her a larger than life hero.

A lush and lyrical biography of Harriet Tubman, written in verse and illustrated by James Ransome, winner of the Coretta Scott King medal for The Creation.

Civil Rights Then and Now by Kristina Brooke Daniele

Civil Rights Then and Now: A Timeline of the Fight for Equality in America presents the reader with facts, biographies, and landmark supreme court cases in an easily digestible manner and within a historical context. The minor editorializing helps to guide readers to understand the events that have shaped the United States and then challenges them to become advocates for change. Read the full synopsis HERE.

Freedman’s book tells the dramatic stories of the heroes who stood up against segregation and Jim Crow laws in 1950s Alabama.

A master of succinct historical narratives, Freeman explains the contributions of and sacrifices made by Rosa Parks and Claudette Colvin, who refused give up their seats, to Jo-Ann Robinson, who began the boycott, to Martin Luther King, Jr., whose leadership was instrumental is carrying it through, and others. Read the full synopsis HERE.

The barbershop is where the magic happens. Boys go in as lumps of clay and, with princely robes draped around their shoulders, a dab of cool shaving cream on their foreheads, and a slow, steady cut, they become royalty.

That crisp yet subtle line makes boys sharper, more visible, more aware of every great thing that could happen to them when they look good: lesser grades turn into As; girls take notice; even a mother’s hug gets a little tighter. Everyone notices. A fresh cut makes boys fly. Read the full synopsis HERE.

This list took forever to compile from an eight-year-old bibliophile who is passionate about his reading. I gave him a task and he truly worked his hardest to breathe life into it and to produce a list worthy of your children reading it. While some of them may be out of his age bracket I felt the story was necessary in the sense because he was curious.

Regardless of his age I gave a pass this quarantine and let him dive deep on his search for information about our rich histories and his search for truth outside of what they are teaching in school.

Some of the books he chose I looked at and smiled because I can tell I influenced them. Mom’s do yourself a favor this summer and show the youth that despite what they see in this world they are born uniquely special and not only does their history matter but they do as well.