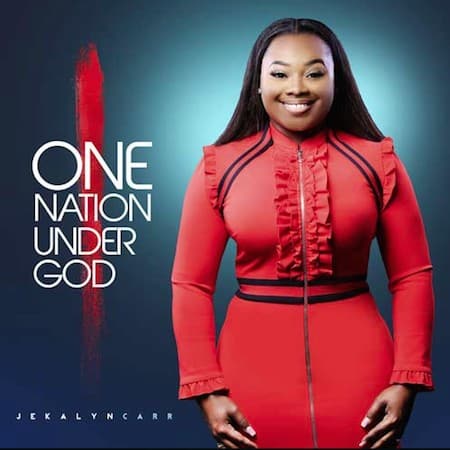 Independent contemporary gospel artist Jekalyn Carr is only 20 years old and has already won the highly coveted Stellar Award. The Arkansas native began singing at the tender age of five. In 2013, she released the single “Greater Is Coming,” independently on her family owned label, Lunjeal Music Group.

Carr’s powerful vocals on the single landed her into the Top 5 spot on the Billboard charts. In 2016, Carr released her follow up album The Life Project. The leading single, “You’re Bigger,” landed at No. 1 on the Billboard gospel charts. That album also earned Carr her first Grammy nomination and her first GMA Dove Award nomination.

Carr is back with a new album, One Nation Under God, and a new single, “You Will Win,” which has already spent five weeks at No. 1 on Billboard and Mediabase Gospel Airplay charts. She recently expanded her ministry and published her first book, “You Will Win: Inspirational Strategies to Help You Overcome.”

I caught up with Carr to talk about her new album, how she maintains a positive outlook, and how her ministry inspired a book.

What can fans expect from your new album, One Nation Under God?

You can expect a sound of unity. I tell people if you love my new single, “You Will Win,” you will definitely love the album in general. It’s such a diverse album, I have a song on there, called “We are One.” It’s letting people know that we need each other, and of course, we need God. I want to remind people that amazing things can happen when we are together.

I have worship songs like, “Stay With Me Worship,” “I Love the Way You Love Me,” I have praise songs, and just different declarations on the album. I believe it doesn’t matter where you are, whether you’re in America, Australia, or Africa, we are coming together as one nation under God to give him glory. And in response, he gives us victory.

How did you come to find God at such a young age? And what made you decide to incorporate God into your music?

I grew up in church so when it came to making music I always said, I started with God, I’m going to continue with God, and finish with God. I wanted to make music that was impactful and inspirational.

A lot of times when people are going through different situations they tend to lean more towards inspirational and gospel music. So I wanted my music to be a resource where people can listen and get that inspiration and motivation.

Your hit single, “You Will Win,” is so inspiring and the words are so simple. How did that song make it to the album?

We were finishing up writing, actually, we were done with the album, but then God said–one more. With this song, in particular, I wanted to get people to understand who they are and the champions they were born as.

You were born to win over your circumstances. And why? Because this is my winning season. And not only is it my winning season but everything attached to me wins. I can’t do anything about the number of times I’ve lost in my past, but one thing’s for sure, I’m going to do everything that I can now to ensure that I won’t be defeated.

What made you decide to pick up a pen and start writing a book?

I always knew that I would write a book. God told me, the first one is, “You Will Win.” This book has been in the making for about two to three years now. And I’m going to be very honest with you, I didn’t know we would be where we are now when God gave me the message to write a book.

Being able to be in a place to give people information on how they can win and how they can overcome is such a beautiful thing. And I’m sure by now many of us know that we are winner’s but we don’t know how to live that life.

So in this book, I teach you how to live a well-rounded winning life. Winning in your health, winning in your relationships, forgiving to win, winning in your career, your visions, whatever it is. This book will give you strategies to achieve your success.

How did you decide what the book was going to be about?

I wanted my book to be well-rounded. My thought was, anyone should be able to read my book and receive inspiration.

Because it’s more than just saying you will win and more than just speaking it. You actually have to do things on your end in order for you to see the fullness of your winning season.

In your book, you have different winning strategies that you cover. Can you share one with us that has been resonating with readers?

One thing that readers have said they enjoy most is the strategy for expanding your thoughts. We have to understand that if we never think beyond our current circumstances, we will never go beyond where we are.

A lot of times when we are in a bad situation our minds will get locked up and then we limit ourselves. And not just with our minds but we also limit our movement.

This strategy teaches, that in order for you to succeed in life you have to look beyond your current situation and begin to think about new ways, new ideas, and different visions that will cause you to move and go further in life.

And I tell people all the time, the greatest force to help with that is Jesus Christ himself. So it’s important for people to know that even when you don’t know where to go–you pray. So that your mind can be expanded and God can give you what you need.

What scripture or song helps to motivate and keep you in good spirits?

I love the legends. I love people like The Winans, I’ll put them on and they’ll make my day. Donnie McClurkin, The Clark Sisters, just all of the legends. They have such good music and they all have amazing spirits as well.

Do you have a favorite author or favorite genre?

My favorite genre to read is autobiographies because I gain a lot of wisdom and knowledge.

In today’s world, how do you find new ways using music to share your testimony and spread the word of God to the youth?

I think one thing that really touches the young people when it comes to me is them seeing how young I am. They see that I’m just like them and I’m a gospel artist. So it inspires them to be successful and operate using their gifts.

My number one goal is to make sure they are operating in who they are because I believe that is what my assignment is: Getting people to see themselves the way that God has created them to be.

I’m very strategic with my music, I recognize that I’m not just a regular singer. So in my music, I want to have substance to give people something to hold onto.

“Stay In Worship,” is a powerful praise song, I noticed that you always have a praise song on your album. Is that done on purpose?

It’s definitely something that we try to make sure we incorporate but then again it just comes out naturally. I want to have a diverse album, but I also want to make sure that I’m releasing what I’m supposed to release when it comes to leading people to God.

From “Greater is Coming,” to “One Nation Under God,” what has been some of your biggest life lessons personally and in the music industry?

Staying strong. Staying true to who I am and knowing who I am. There’s a lot that can get to you in this business but when you know who you are, and when you are aware, you have so much power and authority over distractions that can deter or delay your success.

You have been in the music industry for quite some time, can you share a memorable moment that still blows you away when you think about it?

I would say being nominated for my first Grammy. I honestly didn’t think that I would be nominated for anything. When I was younger all I wanted to do was give people hope and inspire people with my gift.

When I released the song, “Greater is Coming,” so many great things started happening and then came the song, “You’re Bigger,” and then I got nominated for my first Grammy–that was so amazing.

What’s next for Jekalyn Carr?

I’m in the middle of my promo tour, and I’m getting ready to do my first “You Will Win” conference which will be June 21st and the 22nd in Mississippi. I also have a clothing line coming out as well.

What kind of fashion will your clothing line showcase?

It’s going to be a really classy line with a modern twist. There will be some red carpet looks and there will also be items you can wear to work and out with your friends. It’s going to be relatable to all generations. The goal is to have all sizes, I don’t want to leave any of my Sistah Girls out.

What advice can you share with other Sistah Girls who may be struggling and need some encouragement?

Sistah Girls, I want you to know that if you have the will to come out God can pull you out. There is no situation too great, no mountain too high that he cannot pull you from out of. And understand that you were destined and ordained to prosper in life. Don’t allow your current situation to make you sit down or make your reject who you are and the greatness that you’re supposed to walk into.

But instead, let it be your boost and your motivation for you to come into success. There are many people out there in need of your testimony and not just your testimony but your life in general. And they will begin to look at your life and say if she did it, I know that I can do the same thing.

Remember God is fighting for you, he’s fighting with you, and he desires to see you become all that you were created to be. Stick with it, stay with it, keep fighting, because, in the end, it’s going to pay off. This is your winning season, and everything attached to you wins.