Sistah Girls, June was mostly hood reads for me, yeah, I can’t front I was heavily into Urban Romance all month. With that said, June definitely packed some HEAT!

Not sure how your summer kicked off however some of my faves released summer reads that kept me up until the wee hours of the morning. Here is what I read and loved in June…

First up is book 8 in The Connecticut Kings series! 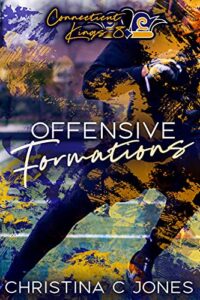 5 STARS for Offensive Formations by Christina C. Jones
“Anything you can do, I can do better – you’ve seen that concept before, right?” – Cole
Teagan Tolliver is on the rise to becoming one of the greatest players on the tennis court. And though she’s a star on the courts she learns that the downside to fame is just how fast you can become a headline of a news story or gossip column.

When Teagan’s name is mentioned by a few football players during an interview on a popular podcast she’s quick to clap back. When Connecticut Kings player, Ambrose finds himself on the receiving end of Teagan’s clap back, but he takes it like a G.

Soon after, these two are drawn together in a way that neither would have expected yet it’s clearly appreciated by them both.

My Thoughts
CCJ really put it down in this sports romance as two determined athletes fight to create their own path by gaining success, each in their own sport. There is just enough angst to get readers entangled into everything Teagan and Ambrose. A flirty friendship that buds into something more serious, why yes, I devoured each page. Well done CCJ! 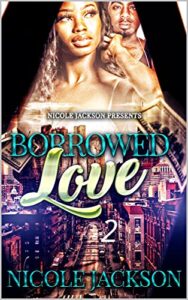 4 STAR READ! Borrowed Love 2 by Nicole Jackson
“But to be alive is to be aware, Yaz. Don’t go out sad trying to prove you ain’t scared.” -Chubby
This Highly-Anticipated release did NOT disappoint. Book one left readers just as devastated as our young female lead, Yaz. After receiving some life-changing news Yaz pushes forward, she immediately realizes that her original plans must be altered to fit into her new life. A life without the guy she fell in love with, Jureal.

However, life continues to throw curveballs and suddenly Yaz finds that she has now come face to face with her past.

My Thoughts
Nicole Jackson takes her readers on a wild ride. Still, it’s one we all asked for the second we read book 1. Jackson brings the drama, the laughs, and plenty of good times to her readers with Borrowed Love 2.

You also get small appearances from characters that either appeared in older books or have had their own book/s. I enjoyed the build-up to that special reconnection that you just know is coming but how and when is lost on you until it just…happens. Jackson ends the book on a high and then teases readers with her upcoming projects. Needless to say, I very much look forward to her next release!

5 STAR READ! For The Streets (Summer 2021) by Cion Lee
‘Nervous energy invaded Bishop’s body because she was talking about one situation, but it applied to another one that already had him on edge’ -Bishop’s inner mood/feelings
Kiyor nor Bishop is looking for a long-term relationship, after years of crossing paths, they find themselves in an entanglement. Their situation quickly becomes one where they both can’t seem to get enough yet no commitment is set.

Things take a turn when Bishop sees Kiyor out on a date. Becoming a couple should be simple but for these two that doesn’t seem to be the case. A secret causes the relationship to veer off course and making their way back might not be so easy.

My Thoughts
When I tell you Cion Lee is that girl, I mean it! I’ve been checking for her for some time now, so when I tell you she’s getting better and better… Believe me. I would never lead you astray. She delivers every time and somehow, she gives it to you without overdoing it. Everything about this book felt relevant with a summer 2021 feel. She’s my TOP recommendation for anyone looking to read an urban romance. 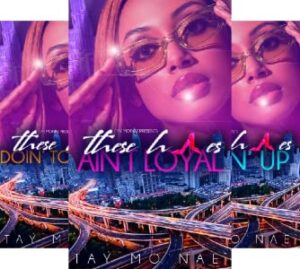 4 STARS for These H*es Ain’t Loyal – These H*es Doin Too Much – These H*es Actin Up by Tay Mo’nae
This is a three-book series that features three rambunctious girlfriends named Celine, Aashi, and Zahra. In Book 1, Celine finds love after a one-night stand. The problem lies in the fact that Celine has a boyfriend…a loving committed boyfriend that she also loves; or does she?

Book 2 features Aashi, she has one of the most toxic on and off again relationships I’ve read. I mean you would think after having to be bailed out of jail after an altercation with her ex and his latest conquest that she would drop him and move on. Nope, not Aashi, she lives in a vicious circle of a cheater’s web.

Book 3 features Zahra, never one to settle down Zahra prefers to have her cake and eat it too. One day she finally meets her match in Dominic, he’s the male version of herself. At first, she doesn’t take rejection well, but she keeps at Dominic until she hooks him.

My Thoughts
Uhhh, I think this is a re-release by Mo’nae. I randomly came across these books while on the hunt for my next read. I recommend this series to readers looking for a quick read that will keep you turning the page to see what happens next.

The author clearly had fun writing the storylines for each of these characters and it comes out on the pages of each book! The 4 Star rating is mainly tied into the pure entertaining feel/mood each read brought to my late-night reading pleasure. I laughed out loud, rolled my eyes, and smirked often while reading.

Reader Beware- While I very much enjoyed this series, I must add that it felt like I was reading a rough draft at times due to the many errors throughout each book. Because I’m not necessarily a stickler for grammatical errors I was personally unbothered. However, I understand that a lot of readers are not a fan of too many errors, therefore if I’m going to recommend a book a heads up would be nice.