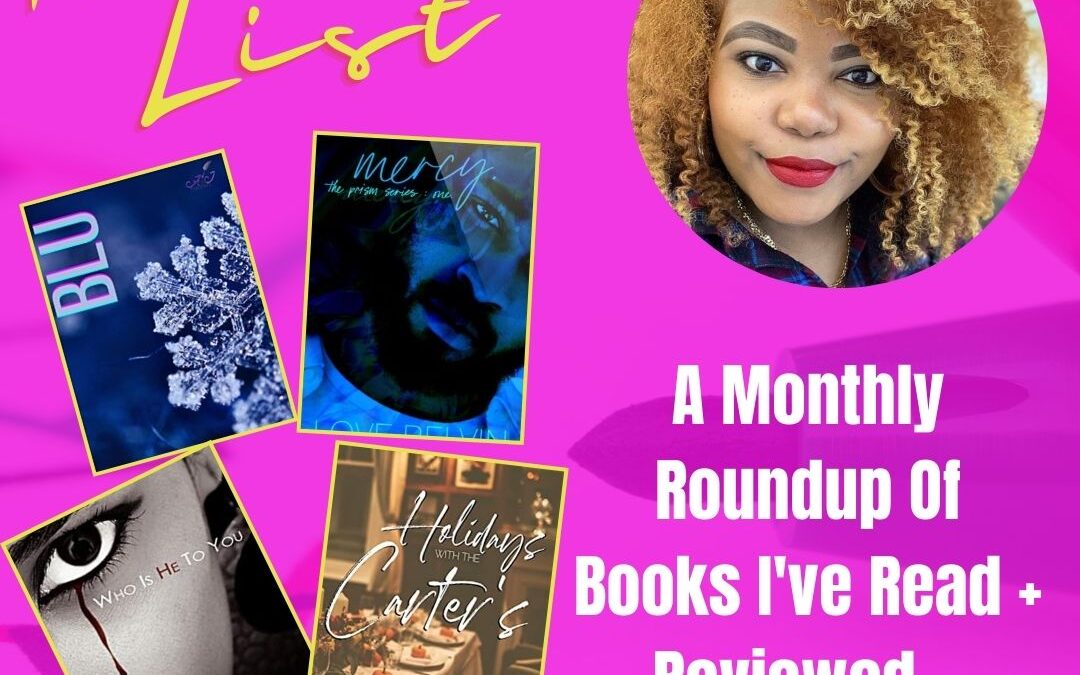 Sistah Girls, November was full of great reads! I tried a few new authors: Kema B, Monique D. Mensah, and M. Monique. All different in style and storytelling.

To my reading pleasure, I found that each one is talented. I also read new releases from Love Belvin and Lucinda John. The surprise for me came from Ladii Nesha, she is adding to her Carter’s series, and I could not be more excited about it! Here is what I read and loved in November… 5 Extremely Dark and Twisted Stars for Who is He to You (Malignant Mind Series) by Monique D. Mensah

In Who Is He to You, readers are introduced to three women, Simone, Jessica, and Ryan. Simone is the youngest of the three, woefully she has the unfathomable happening to her and it’s led her to cutting.

Jessica, married to Ross, portrays herself to be the wife a husband would dream of. Sadly, Jessica and Ross are not ok. She craves his attention and the more she fails to get it the more she tries to escape her sorrows through the bottle by overconsuming alcohol.

Then we have Ryan, a beautiful woman desiring to be married to her boyfriend Anthony. Yet all he does is fill her with the promise of marriage, a promise that he never intends to keep. This is the story of three women suffering through pain from the issues that are seemingly crushing them all, mentally and physically.

My Thoughts
Was the book good? Yeah, it was good.
Did it make you cringe? Yup, sure did–multiple times.

It was not an easy read at all. It’s dark and very twisted. Annnnd, I’ve read some very dark and twisted books in my life however this is one of the darkest. Read at your own risk. Literally. 4 Big Toxic Stars for Toxic by Lucinda John
“Once I flip you over and get into position, ain’t no turning back,” I warned. “You sure you want to do this?” I searched Mi’Amor’s eyes for clarification.’ – Law to Mi’Amor

Mi’Amor is a young and spoiled rich girl that finds herself in the crosshairs of a street thug. Law has his reasons for choosing the young girl although his plans quickly change when he finds himself falling for her. Unfortunately, Law has a secret or two or three but it’s not his secrets that change them. It’s the secrets that Mi’Amor has that shatter both of their hearts.

My Thoughts
Toxic. Messy. Exciting. Painful. Shocking. This book was all of that up until the very last page. I had higher expectations for Law and I kind of felt played by him.

Mi’Amor was younger and I cut her some slack because she did all the things a young girl her age would do. I tell you one thing though; she grew up quickly. The writing was fast-paced, and the story was full of ups and downs to keep you turning the page.

5 Lord, please have mercy on me for a quick book 2 release Stars for Mercy (Prism, Book 1) by Love Belvin
‘Why am I here? I’d been crossing paths with her for about two weeks now, and too many times I thought it was the last time, only for there to be one more.’ – The thoughts of Jas

Ashira is young, black, beautiful, and rich. She is the CEO of her father’s New Jersey building firm. A true female boss in her own right in a field dominated by men. However, she’s a bit quick to judge. This comes to be a big mistake when it comes to Jas, a felon fresh off a ten-year bid, currently working in construction.

DAMN. DAMN. DAMN. The second I finished this book I wanted to re-start reading it. Love Belvin really has a way of puuuulllling a reader in and then spitting you out at the end of her book.

Like seriously, WTFrick just happened? That ending. Sheeeesh. When I tell you I was all in, I mean I was alllll in. I literally felt secondhand embarrassment for both the male and female leading characters at the end. My feelings split in two different ways, but it was simultaneous because of how everything played out.

That whole last scene? WHEW! Too many emotions rose in me at once. Yeah…it was too much but well worth the wait. Belvin got clever with how she spun Jas and Ashira’s characters. I need book two NOW! Very well-done LB! 3 Stars for Blu by M. Monique
‘Blu was easily the most aggressive, yet sweetest man the I knew. He was up in my face barking at me like he was furious. Yet his eyes were soft and holding back flames that would spit forth and burn me should I say the wrong shit.’ -Inner Monologue of Jacoba

Jacoba is a female rapper at the top of her game. After her longtime boyfriend is arrested Jacoba starts to receive threats from her ex because in his mind she had something to do with his arrest.

Suddenly, Jacoba finds herself in need of more protection. Enter Blu Summers, a retired FBI Agent called to duty by special request. He has no idea that Jacoba has set her sights on him and once he realizes it, he tries his best to keep it professional. His rejection only makes Jacoba go harder.

My Thoughts
I enjoyed this read. Blu is a cute romance that featured a female hip hop star (Jacoba) with an Alpha male bodyguard (Blu) that becomes her love interest. The story is told from multiple pov’s, it has a twist readers won’t see coming and some fun secondary characters that keep you engaged as well with their secondary storylines. 4 Solid Stars for Free Game (A Foxview Heights Novel) by Kema B.
“If I don’t get attached, I can’t get hurt. These feelings I have for Freedom means he can and will hurt me. I know it, and I’m not willing to take the risk.” I said, finally admitting my truth.’ – Isis

Isis is not looking to fall in love. She’s a free spirit that prefers to do her own thing and move on soon after. That quickly changes when meeting her favorite rapper, Freedom, after he pops up in the tattoo shop she works in.

What should have been a fling with no strings attached soon becomes a relationship. Only Isis isn’t ready for that, so she begins to pull away much to the dismay of Freedom.

My Thoughts
Not going to lie, it took me some time to get into this novel. I was probably halfway through by the time I was caught up in the story. Free Game was full of pop culture references, and I enjoyed that touch in the writing.

I did feel it was odd for Isis to not notice or at least figure out on her own that she was talking to her favorite rapper. All in all, it was a fast-paced written romance dealing with a female lead not yet ready for love with her very famous male love interest. 5 Stars for Holiday’s with the Carter’s by Ladii Nesha (Note: this is part of a series and must be read in order)
“We got her.” Saedy promised just as loud music started to play in the house.
‘Just a vacancy,
Love don’t live her, anymore’
“Oh damn, she playing Rose Royce. This is bad.” Peach moved around him. “We’ll call you later.”
– Saedy and Peach to Check

It’s the holiday season and everything that could go wrong goes wrong. The Carter’s find themselves each facing drama in one way or another as one of the couple’s readers have grown to love hits its breaking point. Well, possibly more than one couple to be honest.

My Thoughts
Every link up with this family is a fun read. There is so much drama and laughs in this holiday short that I could barely contain my outbursts of laughter. Ladii Nesha doesn’t play fair because that ending has me on edge feeling like a straight-up crackhead in need of her next hit. Can I have book two now pleeeease!